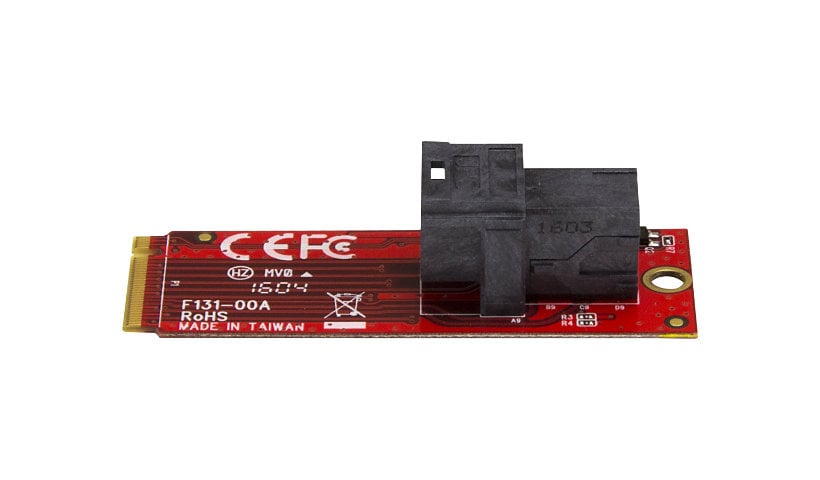 Add U.2 PCIe NVMe SSD performance to your desktop computer or server, by connecting a U.2 SSD to an M.2 PCIe x4 host interface. This PCI Express U.2 to M.2 adapter makes it easy to install a high-performance U.2 PCIe-NVMe SSD into your desktop PC or server and connect the drive through an M.2 PCIe x4 slot on your motherboard. By creating compatibility with newer U.2 NVMe SSDs, such as the Intel SSD 750 series, this enterprise-class drive adapter enables you to gain faster read/write speeds and higher productivity levels for data-intensive applications.

This drive adapter card lets you optimize your system performance by harnessing the increased speed and low latency of a U.2 PCIe-NVMe SSD (compared to regular platter drives), by adding a U.2 interface to your system.

The U.2 to M.2 adapter is ideal for IT professionals, system integrators and installers, and enthusiasts who are building or upgrading a server or desktop computer. It's a cost-effective alternative that delivers the superior performance of newer U.2 NVMe SSDs, without the expense of replacing the system motherboard for the sake of compatibility.

The U.2 to M.2 adapter works with all desktop PCs and servers that have an M.2 PCIe x4 host interface. The adapter card is OS independent, so there are no drivers or software required for installation.

The M2E4SFF8643 is backed by a StarTech.com 2-year warranty and free lifetime technical support.