Company's IT team frees up time spent on routine infrastructure maintenance to focus on innovation and business goals.

Keeping the lights on. What IT team hasn’t been in that position at some point — sometimes, even day in, day out?

The demands of managing and supporting standing technology workloads can make it hard to use IT to gain strategic advantage, particularly in today’s 24/7 world, says Norm Mackensen, IT director for Briggs & Stratton, the world’s largest maker of gasoline engines for outdoor power equipment.

Until the Milwaukee company moved to managed services, its IT team easily spent only 20 percent of its time, “if we were lucky, on what the business needed to move ahead and building out capabilities to do it,” Mackensen says.

Before working with CDW a half-dozen years ago to offload its more routine needs, the IT staff scrambled to keep systems up and running across the sprawling company, which is a leading designer and manufacturer of lawn, garden and job site equipment in addition to its engine work.

The IT team’s days were largely devoted to maintaining applications, leaving little time for optimizing the infrastructure or devising ways that technology could further Briggs & Stratton’s business goals, Mackensen says.

The company reached a critical juncture seven years ago, when upper management made the decision that it wanted to derive more business value from IT. At the same time, 30 percent of the technology team’s employees were approaching retirement. An outside evaluation recommended that Briggs & Stratton outsource any IT functions — infrastructure management, application enhancement, daily troubleshooting and maintenance — that were not core competencies, Mackensen recalls.

“Before we made the big move into managed services, our internal IT people were about 80 percent focused on just keeping the lights on,” he says. “Now, the split is more like 50-50, and we provide much more value to the company.”

Can CDW Managed Services really become an extension of your in-house IT staff? Visit our managed services page.

The Proof Is in the Partnership

Briggs & Stratton chose CDW as a managed services provider because of a long history of successful engagements between the two companies, Mackensen says.

For two decades, CDW has been a hardware and software provider for Briggs & Stratton’s IBM and Cisco Systems infrastructure. It also helped build and then manage a voice and contact system for Briggs & Stratton in 2003, and took over management of the company’s web environment and customer-facing portals in 2008, focusing specifically on security and Payment Card Industry compliance.

“We were really new to outsourcing on a large scale when we decided to make this massive change, so we needed trusted partners,” he says. “CDW had been heavily involved in building our internal data center with Cisco, IBM and Microsoft, and they also have expertise in the cloud.”

Before the move to managed infrastructure services, the internal Briggs & Stratton IT staff was stretched thin, relying on single specialists for many of its functions, Mackensen says. “We had people who were good at what they did, but we were single-threaded in a lot of areas of infrastructure technology,” he says.

“I remember a time when the one person who was responsible for our storage environment had gone deer hunting for a week. I had storage problems, and he was out in the woods somewhere. There I was, no backup, no cross-training and no third party like CDW to go to for the services I needed. It was miserable.”

Since the shift to managed services, such resourcing concerns have disappeared, he says.  “We don’t have to think about the breadth or depth of the skills that CDW brings or the level of competence. They’re always there to maintain services and solve problems.”

The percentage gain in time, says IT Director Norm Mackensen, that the Briggs & Stratton IT team can now give to innovation since moving to CDW Managed Services 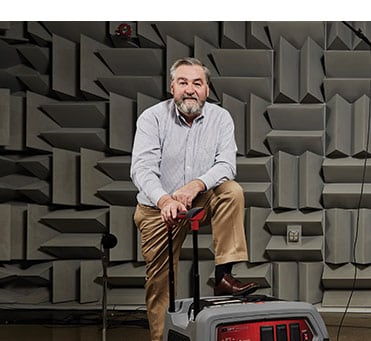 We don’t have to think about the breadth or depth of the skills that CDW brings or the level of competence. They’re always there to maintain services and solve problems. 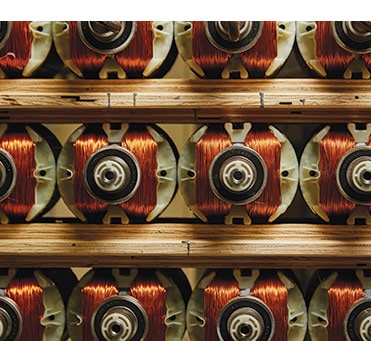 The magnitude of the Briggs & Stratton transition from reliance on in-house IT to outside managed services made it especially imperative that the move go smoothly, says Joan Hughes, an engineering manager for CDW Managed Services.

“When you’re going into what has been an in-house environment, there’s always hesitation on both sides,” she says. “This was a huge implementation across their entire computing environment. We had to live up to the consistency and reliability that we had shown in the past and do even more to justify their confidence in us. The stakes were high because we became responsible for their whole infrastructure.”

Before the shift, the Briggs & Stratton infrastructure reflected the challenges internal IT had faced in maintaining the company’s 47 sites across the United States and around the globe, says CDW Advanced Technology Executive Bruce Kurkiewicz.

Among CDW’s first tasks was updating systems by making sure all software patches were current, security was tightened and existing maintenance issues were resolved, he says.

That first step is necessary when moving to managed services so that the customer has a baseline, Kurkiewicz says. All work hinges on service-level agreements, certifications and clear processes, he says.

“When we took over management of the infrastructure, we took over their challenges,” he explains. “As the service provider, you’re responsible to make the environment better, not just maintain services at the previous level. In the years CDW has provided infrastructure services to Briggs & Stratton, their IT has moved up on the Microsoft IT Maturity Scale, toward stability and predictability.”

Another benefit of the relationship comes from CDW’s extensive knowledge of emerging technologies and how it helps make Briggs & Stratton better, Mackensen says. “New technologies arrive every day, and we don’t know about all of them or their capabilities because we’re focused on our business,” he says. “CDW helps us be more forward-thinking and energizes our resources.”

In 2017, CDW completed a Cisco Intelligent WAN installation across the company, a project that began when Kurkiewicz and CDW engineers suggested that Briggs & Stratton should consider software-defined networking.

The IT team recognized SDN’s potential value to the company and planned out the investment in its budget. CDW then developed the scope of work, which was executed by the CDW Field Services team. That team then turned the IWAN over to the Managed Services team as part of the infrastructure portfolio.

“The IWAN has redesigned the way the company communicates across its networks,” Hughes says. “It’s the kind of project CDW can do because of the variety of services we can offer.”

CDW has also invested resources up front to explore possible improvements to the Briggs & Stratton infrastructure, Kurkiewicz says. For example, CDW initiated a virtualization evaluation and created a roadmap for adopting the technology to decide whether there would be value to Briggs & Stratton. Ultimately, the virtualization project reduced the company’s server footprint by 80 percent.

Technical knowledge and innovation are key benefits offered by CDW Managed Services, but they shouldn’t overshadow the value of relieving the daily build-fix grind for Briggs & Stratton’s internal IT staff, Hughes adds.

“We try to stay close to the cutting edge of technology in ways that are relevant to their business,” she says. “Managed Services is obviously a 24/7 shop, with all our resources available to solve problems. For some internal IT operations, there might be one person watching the infrastructure.”

A Partnership 20 Years in the Making

Briggs & Stratton and CDW have been technology partners for more than two decades.

CDW manages devices in 47 Briggs & Stratton locations across the globe, with an array of infrastructure services:

Network: 100 percent of the LAN and WAN support for over 600 devices

UNIX/AIX: Full support and management of the IBM AIX platform that hosts SAP, Oracle and other business-critical applications

Finding the right Briggs & Stratton IT personnel to collaborate closely with CDW on a daily basis required rethinking the way the IT team worked, Mackensen acknowledges.

“It’s a different skill set than we needed with our in-house model,” he explains. “It’s my role to manage the business relationship with CDW, but we needed people on this side who could manage services provided from the outside — rather than managing and maintaining hardware and software themselves.”

To meet the need, Briggs & Stratton created a group to act as the day-to-day link with CDW. It provides onsite support for situations when an eyes-on or hands-on evaluation of a problem is necessary, says Mark Griswold, who leads the Briggs & Stratton group.

A crucial part of the job is coordinating with CDW to ensure that it manages infrastructure in a way that aligns with Briggs & Stratton’s business needs, says Griswold, global manager for IT service operations.

“Communication and coordination are done really well in our relationship with CDW,” he says. “We work with them to help them understand the impact on our business of any changes or maintenance, and they pay attention. They are the experts on the infrastructure technologies, from a high-level engineering perspective down to individual servers and routers.”

The value of this deep knowledge of Briggs & Stratton’s Cisco IOS environment is apparent when things go wrong, and the scope of CDW’s expertise also contributes to making the business run more smoothly, Griswold says.

“They have the ability to identify where a problem is and then bring in not just one, but many experts to help solve it,” he says. “CDW also suggests changes to keep us up to date and support the business. They help us understand how technology can help.”

CDW has guided Briggs & Stratton to state-of-the-art videoconferencing capabilities, as well as designed and managed the company’s virtual desktop infrastructure deployment, which improved communication and collaboration between international branches and U.S. headquarters, says Griswold, who also supervises IT at overseas locations.

“They have the engineering and architectural expertise, along with the management services, to take projects from beginning to end, and always with what’s best for our organization — in both the short and long term,” Griswold says. “CDW not only keeps the lights on, they pull us forward.”

WHO: Founded in 1908 and headquartered in Milwaukee, Briggs & Stratton is the world’s largest producer of gasoline engines for outdoor power equipment, and is a leading designer, manufacturer and marketer of power generation, pressure washer, lawn and garden, turf care and job site products through a large family of brands. The company has 51 locations worldwide.

WHAT: Briggs & Stratton engaged CDW Managed Services for the management and support of its infrastructure and related technologies both in the United States and globally.

WHY: Managed infrastructure services provide added reliability and troubleshooting capabilities while freeing internal IT to make a greater contribution to business strategy.