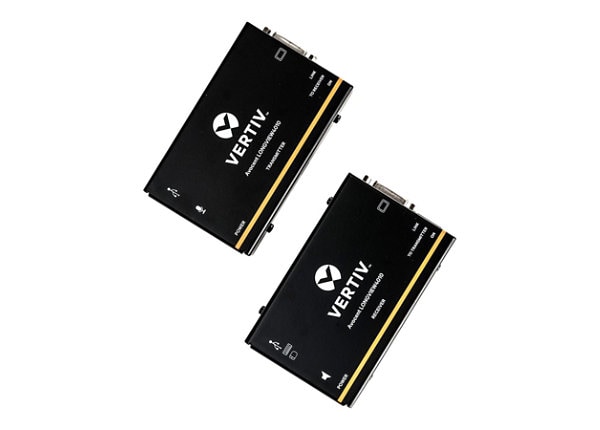 Main Features
The Vertiv Avocent LV 4000 High-Performance KVM Extender Kit allows computing assets to be in secure, climate-controlled environments away from the workstation, while still delivering seamless and instantaneous KVM control. The extender supports DVI transmission and can transmit up to two single link high-resolution (1920x1200) video streams, USB 2.0 and analog audio over a single or multiple CATx cables to single and multi-screen desktops up to 50 m. / 164 ft. away. Pass through ports allow use of a local console at the transmitter and/or receiver as needed. The Vertiv Avocent LV 4000 KVM extender supports isochronous USB devices such as webcams and touchscreens. The Avocent LV 4000 high-performance KVM extender does not require on-site configuration, plug them in, and start working right away without drivers or software to install. Bring order to environments that can’t afford unnecessary complexity with the Vertiv Avocent LV 4000 High-Performance KVM Extender Kit.