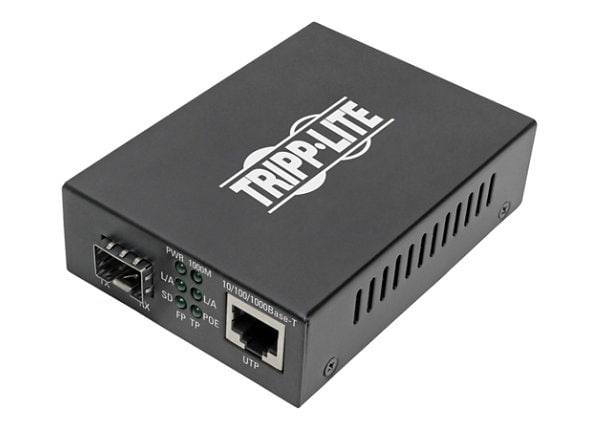 Main Features
This economical unit converts a singlemode or multimode fiber optical signal to a copper Ethernet signal that extends both power (48 VDC) and 10/100/1000 Mbps Gigabit Ethernet to a PoE+ (Power over Ethernet) device. Because Cat5e/6 cables are limited to only 100 meters, it is more effective to couple the N785-P01-SFP with fiber cable to reach greater distances. This could include providing both data and power to PoE and PoE+ devices, such as security cameras, VoIP telephones, point-of-sale kiosks and access control devices.

The N785-P01-SFP lets you choose a transceiver that suits your system, while also delivering power to your PoE+ device (Tripp Lite's N286-01GSX-MDLC and N286-01GLX-SLX transceivers sold separately). It connects to a Tripp Lite N785-Series non-PoE media converter using your choice of singlemode or multimode cabling. It also delivers data and power to a 10/100/1000 Mbps PoE device up to 100 meters (328 feet) away using Cat5e/6 cabling (such as Tripp Lite's N001- or N201-Series cables).