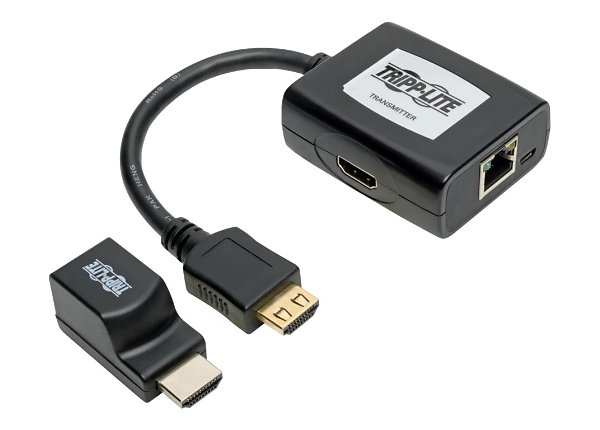 Main Features
The B126-1P1M-U-POC HDMI over Cat5/Cat6 Extender Kit includes a transmitter and a low-profile receiver that work in tandem to extend an HDMI audio/video signal to a projector, monitor or television. The kit is recommended for digital signs, trade shows, classrooms, churches, offices, retail settings and other applications where the source is located farther than conventional cables allow.

HDMI cable (see Tripp Lite's P568-Series) connects the audio/video source, such as a Blu-ray player, and optional local display to the transmitter's HDMI ports. Cat5e/6/6a cable connects the transmitter to the receiver's RJ45 port (for best results, use 24 AWG solid-wire Cat6 cable, such as Tripp Lite's N202-Series). The receiver plugs directly into the display's HDMI input port. Built-in PoC technology powers the receiver over Cat5e/6/6a cable, so no external power supply on the display side is needed.

The B126-1P1M-U-POC can extend a high-definition 1080p (at 60 Hz) signal up to 50 feet and a 1080i signal up to 100 feet. In addition to crystal-clear video, the B126-1P1M-U-POC delivers full, rich audio up to 7.1-channel surround sound (multi-channel or PCM) and supports 3D and HDCP standards. Easy to set up with no software or drivers to install. Complies with the Federal Trade Agreements Act (TAA) for GSA Schedule purchases.