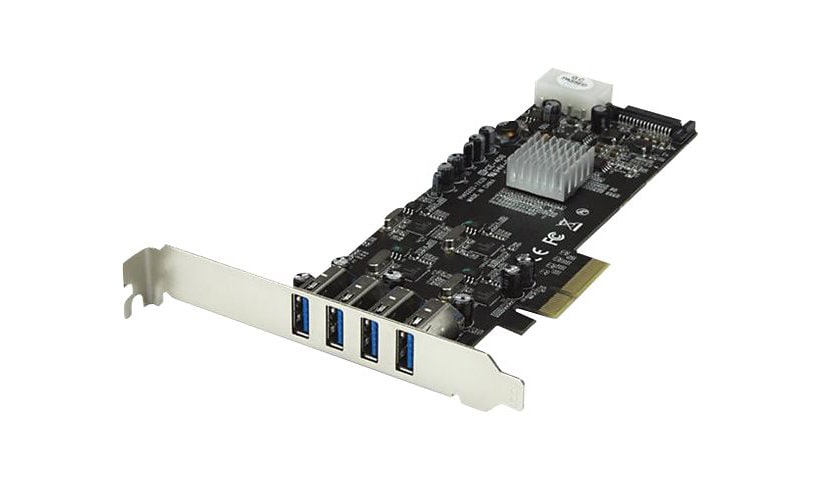 When multiple devices are connected, traditional single bus USB 3.0 cards share your maximum bandwidth between all ports. By employing four host controller chipsets, each port operates on a separate independent transmission channel. Dedicating up to 5 Gbps to each USB port reduces performance bottlenecks, and effectively quadruples your total available to bandwidth to 20 Gbps.

For high-power USB devices, this PCIe USB 3.0 card includes an optional SATA or LP4 power connector to connect to your system power supply and deliver up to 900mA of power per port to USB 3.0 bus-powered devices (500mA for USB 2.0). The USB 3.0 card also supports USB Battery Charging Specification 1.2 (Apple Mode only), letting you charge compatible Apple devices (iPhones and iPads) faster than a standard USB 3.0 port.

The controller card is compliant with USB 3.0 standards while offering backward compatibility with existing USB 2.0 / 1.1 devices. For added versatility, the USB 3.0 PCIe card is equipped with a standard profile bracket and includes a low-profile/half-height bracket for installation in small form-factor computers.

At the same peak in testing, UASP also showed up to an 80% reduction in required processor resources.

As you assemble your hardware, configurable options may change or become unavailable.
StarTech.com 4 Port USB 3.0 PCIe Card w/ 4 Dedicated Channels - UASP is rated 4.00 out of 5 by 5.
Rated 5 out of 5 by Lee J from Works Amazing for oculus rift Recently bought this to solve my usb issues as the rift is a bit of a bandwidth hog and wow :o after installing this everything is just perfect. runs so well no issues what so ever with windows 10, the drivers install perfectly using for just over a week now and my vr experiance is so much better. its worth the price tag! :3.
Date published: 2018-05-27T00:00:00-04:00
Rated 5 out of 5 by Spenny from Perfect for the Oculus The dedicated channels are a must for any VR device owner, or those looking to insure USB storage is performing at it's absolute best. Plug and play in Windows 10. It has been flawless.
Date published: 2018-03-02T00:00:00-05:00
Rated 5 out of 5 by ManglerX from Great card but StarTech needs to update drivers I have purchased 2 of these now. They work awesome BUT after a system upgrade to Ryzen 7 CPU and a ASRock mobo that has PCIE 3.0 and 2.0 ports the card will only function on the 3.0 slot. my last PC 2.0 slot was not an issue. The drivers have not been updated since 2012 and Windows default driver is no good... it sees the card but says it cant start... HELP!
Date published: 2018-12-05T00:00:00-05:00
Rated 5 out of 5 by virgopunk from To big for teh backplate! Great card in terfms of specs, however, I've found that having the USB ports verticle rather than horizontal makes it impossible to actually plus a USB device in. The back plate of my PC is too narrow. Now I'm guessing the gap is industry standard so I have no idea how Startech managed to get this product out there. In order to make this work I'm going to need to physically file the back port to make the gap wider.
Date published: 2019-04-20T00:00:00-04:00
Rated 5 out of 5 by syn111 from Great card, wrong port orientation I bought this to allow additional peripherals. While the card is the best I found in terms of quality and speed, the USB port placement is terrible and it is impossible to plug anything into them unless I cut my case. An horizontal place would have been way more appropriate.
Date published: 2018-09-08T00:00:00-04:00