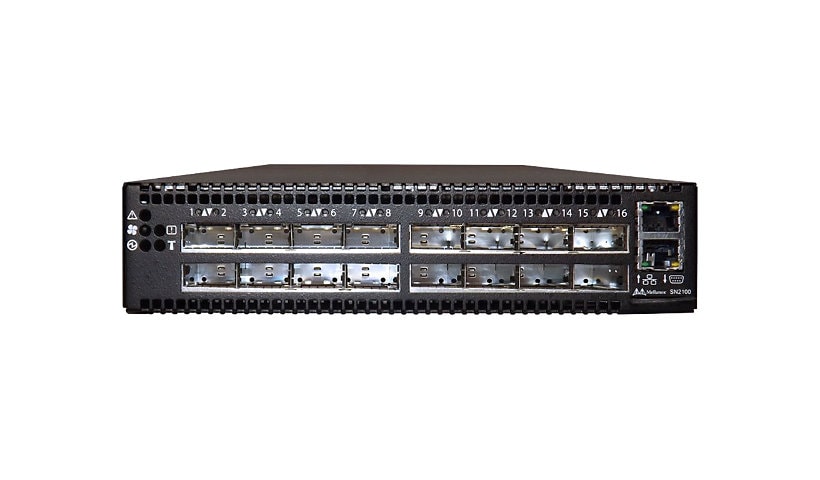 The SN2100 switch is an ideal spine and top of rack (ToR) solution, allowing maximum flexibility, with port speeds spanning from 10Gb/s to 100 Gb/s per port and port density that enables full rack connectivity to any server at any speed. The uplink ports allow a variety of blocking ratios that suit any application requirement. Powered by the Mellanox Spectrum ASIC and packed with 16 ports running at 100GbE, the SN2100 carries a whopping switching capacity of 3.2Tb/s with a landmark 2.38Bpps processing capacity in a compact 1RU form factor.

Keeping with the Mellanox tradition of setting performance record switch systems, the SN2100 introduces the world's lowest latency for a 100GbE switching and routing element, and does so while having the lowest power consumption in the market. With the SN2100, the use of 25, 40, 50 and 100GbE in large scale is enabled without changing power infrastructure facilities.

The SN2100 is part of Mellanox's complete end-to-end solution which provides 10GbE through 100GbE interconnectivity within the data center. Other devices in this solution include ConnectX -4 based network interface cards, and LinkX copper or fiber cabling. This end-to-end solution is topped with Mellanox NEO, a management application that relieves some of the major obstacles when deploying a network. NEO enables a fully certified and interoperable design, speeds up time to service and eventually speeds up RoI. The SN2100 carries a unique design to accommodate the highest rack performance. Its design allows side-by-side placement of two switches in a single, 1RU slot of a 19" rack, delivering high availably to the hosts.

Database solutions require high availability and the ability to scale out in active-active configuration. For example, DB2 pureScale or Oracle RAC require high bandwidth and low latency to the caching facility, the disk storage system etc., with connectivity to the application servers. The SN2100 is a best-fit, providing the highest network throughput, resilience and a mix of 25GbE and 100GbE ports.

The SN2100 introduces hardware capabilities for multiple tunneling protocols that enable increased reachability and scalability for today's data centers. Implementing MPLS, NVGRE and VXLAN tunneling encapsulations in the network layer of the data center allows more flexibility for terminating a tunnel by the network, in addition to termination on the server endpoint.

While Spectrum provides the thrust and acceleration that powers the SN2100, the integrated a powerful x86-based processor allows this system to not only be the highest performing switch fabric element, but also gives the ability to incorporate a Linux running server into the same device. This opens up multiple application aspects of utilizing the high CPU processing power and the best switching fabric, to create a powerful machine with unique appliance capabilities that can improve numerous network implementation paradigms.
Availability: Item Backordered
CDW cannot guarantee an in-stock date.
Can't wait? View Similar Items