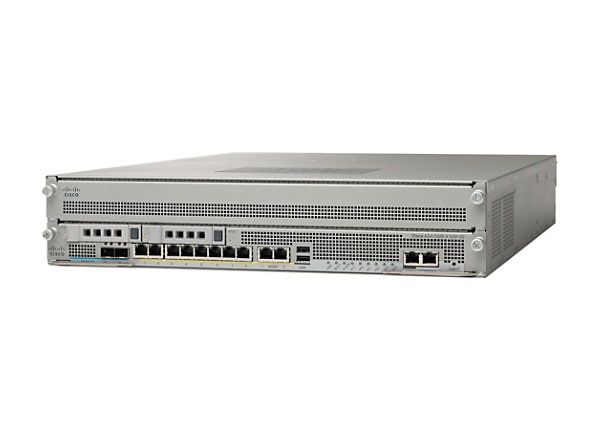 Main Features
The ASA 5585-X adaptive security appliance is a 2 RU, two-slot chassis accommodating up to two AC power supply modules, which also contain the necessary cooling components for operation, although you can install a fan module in the second bay. The Security Services Processor (SSP) resides in slot 0 (the bottom slot) and the optional Intrusion Prevention System Security Services Processor (IPS SSP) resides in slot 1 (the top slot). All port numbers are numbered from right to left beginning with 0.

In addition to world-class performance, the ASA 5585-X deploys encrypted traffic inspection, port density, and feature performance matching, that is, performance parity between firewall and IPS functions. The ASA 5585-X series adaptive security appliances ship with a core SSP; You must have the core SSP to run the IPS SSP.

The ASA 5585-X SSP-20 provides firewall, VPN support, and 10 interfaces (2 SFP/SFP+ and 8 copper Gigabit Ethernet). You can also order it with the IPS SSP-20, which adds intrusion prevention system