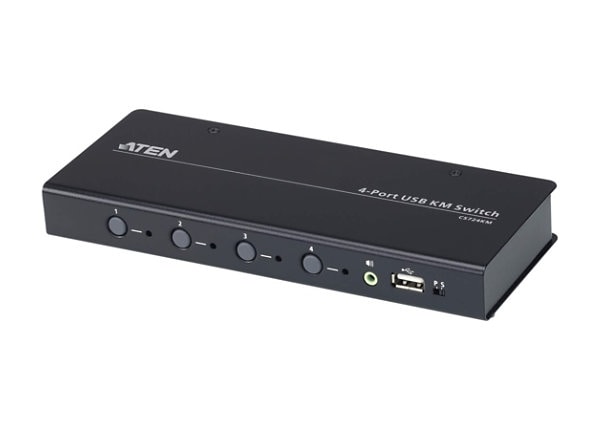 Main Features
The CS724KM is a 4-Port USB KM Switch that enables users to control up to 4 computers with a single keyboard and mouse. Two switches can be daisy-chained to enable control of up to 8 computers from a single console.

The CS724KM's Boundless Switching function supports extended desktops with up to four monitors, and up to eight monitors when two switches are daisy-chained, expediting the process of switching between computers for a smooth and hassle-free user experience. In addition to making multitasking across multiple displays more efficient, this function is especially useful in emergencies that necessitate the immediate monitoring and management of computers.

The CS724KM also provides an intuitive GUI-based configuration utility that allows users to customize their mouse cursor movement paths according to the specific monitor layout at the desktop or workstation. The configuration tool is easy to set up and compatible with Windows operating systems.

Further advanced features of the CS724KM include bus-power mode which means no external power adapter is required, as well as independent switching of the keyboard/mouse, USB peripheral, and audio focus via hotkeys. With a rich feature set, the CS724KM is designed to simplify administrative tasks, save space, and increase work productivity in multi-monitor extended desktop environments, and is especially suitable for complex multitasking applications in control rooms in any industry.