With Lenovo and Nutanix hyperconverged infrastructure, FNCB Bank has held steady through the COVID-19 crisis and wants to be poised to take advantage of future opportunities.

“It’s nothing short of fantastic,” Kirk S. Borchert, vice president and technology services officer at the Dunmore, Pa.-based bank, says of the upgrade to Lenovo switches and hyperconverged infrastructure (HCI), powered by Nutanix Acropolis Hypervisor, that his team deployed with help from Lenovo professional services. “Their lives are so much easier maintaining these systems, and the stability is amazing.”

Then the coronavirus crisis hit. Businesses had to shutter office buildings with a few days’ notice. Many scrambled to buy hardware and software to equip remote workers. Some floundered in the process. Others scaled back operations.

That’s when FNCB’s new infrastructure truly proved its worth. “We cleared out the bank pretty quickly when this started to happen,” recalls Ronald S. Honick Jr., senior vice president of operations and technology services officer. “Within a couple of days, almost everyone was offsite, and it was essentially business as usual.”

FNCB credits its success not only to its modernized equipment but also to its partnership with Lenovo, Nutanix and CDW. Rather than upgrade outdated hardware and software and evolve from the past, they collaborated to rethink the bank’s entire infrastructure with future business goals in mind.

The volume of data running through FNCB’s data center 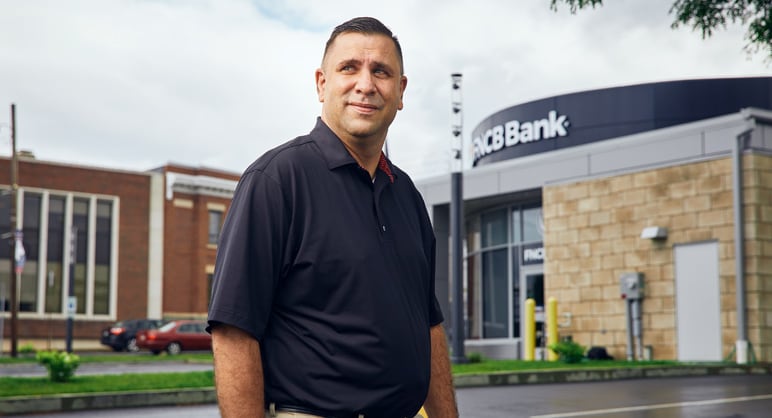 “We wanted to make broader-scale change and not just swap out parts — actually make a meaningful change in strategy going forward.”

For instance, when FNCB planned the implementation of its virtual desktop infrastructure (VDI), rather than just move over its prior Citrix environment, Lenovo suggested different management software options that might be better suited to the bank’s needs. It ultimately switched from Provisioning Services to Machine Creation Services.

“That alone increased performance and allowed us to have a better experience on multiple devices,” Borchert says. “The stability of the environment and the way it was architected supported more virtual clients than the previous version.”

That meant that when the COVID-19 shutdown began, staff didn’t need to be in the office. “I could have them anywhere,” he says. “If we were under the old system, we would not be able to do it.”

Technology Partners in Lieu of Vendors

Four years ago, when Honick started at FNCB, the bank’s previous data center infrastructure was nearing end of life. But IT staff took a bit of time to decide on upgrades. “We wanted to make broader-scale change and not just swap out parts — actually make a meaningful change in strategy going forward,” Borchert recalls.

Many of FNCB’s vendors, however, were local businesses offering specific point technologies. That was fine for the small community bank that FNCB once was, but it created limitations for an institution looking to grow.

“If you’re going to grow, you have to shed the ties to some vendors that aren’t growing with you,” Borchert says. “It’s really hard to look at the big picture if you’re with someone who’s driving to a certain vendor.”

In fact, Honick says he hired Borchert in part because he didn’t have a banking background, and he wanted an outsider’s more comprehensive perspective on IT.

It didn’t take long for Borchert to grow frustrated with the technology vendor that FNCB had been using. A quick Google search turned up CDW, and he decided to call.

At 7:30 a.m., he was instantly transferred to an account representative, who asked about the bank’s challenges and goals, took notes, then began introducing him to various experts from CDW. “So now I’m starting to feel a support network,” Borchert recalls.

As they were having these conversations, Honick was telling him to look for partners, not vendors. “I want vendors interested in me, that want to grow with me,” Honick says. “I don’t need someone to sell me something.”

CDW became that partner. They set up face-to-face meetings with several vendors to answer questions about their products. Before long, Borchert began referring cold calls from vendors to his partner, CDW. “I like having a buffer there that understands my infrastructure and is willing to be there and understand all the moving pieces,” he says. “It takes a little bit of the workload off me.”

At a CDW conference in Nashville, Tenn., in 2018, the FNCB team met representatives from Lenovo: account executive Chris Sullivan and service delivery architect Ben Wang. Borchert and Honick told them about their infrastructure and goals, including lowering their annual costs and simplifying their infrastructure. Sullivan and Wang suggested they look into Nutanix and invited them to a Lenovo executive briefing a few months later.

“They had an engineer sitting there to help map it out and see if it’s right for us,” recalls Borchert.

All the while, CDW continued to explore solutions with FNCB, but they kept coming back to Nutanix. “It gave us everything,” Borchert says. “And the commitment from Lenovo and the way that they looped in CDW and kept them part of it — those were the things that drove us to say, ‘This is who we want to partner with.’” 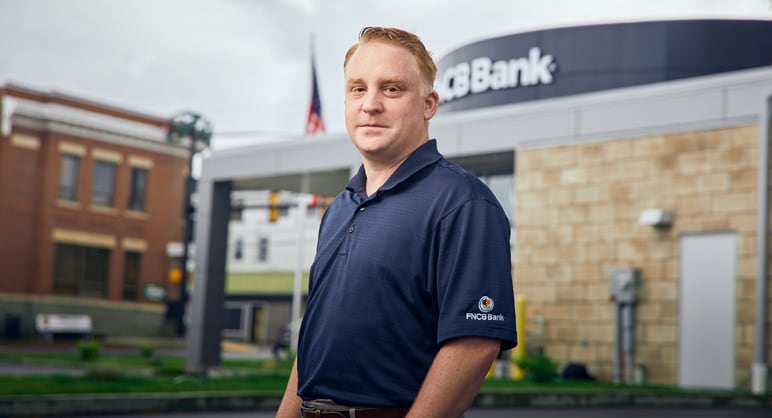 “It’s about planning and not being afraid to do something that’s not what you’ve done for the last 10 years.”

Lenovo and Nutanix worked onsite for two weeks in November and December implementing the new system. One day, a bank executive asked Honick when they would be done. “‘I don’t see any progress. Are you behind schedule?’” Honick recalls him asking. “I said, ‘You’re already running on it.’”

He viewed that as a testament to how smooth the implementation was. “It’s really hard to make things look easy,” Honick says.

Lenovo spent a year working with FNCB to configure the new infrastructure. It ran benchmarking tools for a week each quarter to graph the company’s growth and make projections so that FNCB didn’t outgrow its solution.

Before purchasing the equipment, Sullivan ran the tools once more and realized that the bank’s storage use had plateaued in the past six months, and the new infrastructure would have had 100TB of excess storage. So he adjusted the order to reduce storage, add processing cores and memory, and increase the number of nodes from eight to 12 — two more at both the primary and backup data centers — at the same cost.

“It really worked out, and then with COVID, which nobody saw coming, it ended up paying itself off in dividends,” Sullivan says.

While the infrastructure more than proved its value during the coronavirus shutdown, the benefits became clear to the IT team well before then.

“The fact that they can spin up a new VDI environment — add more machines to it in a matter of seconds — is mind-boggling to them,” Borchert says. “We did a server build in under 10 minutes. These are things that just weren’t done before.”

One of the biggest advantages is its ability to help with capacity planning, Borchert says. The bank’s old infrastructure was scalable, but it required bolting on different components, which could be complex. Because everything with the new solution is native to Nutanix, the IT team can expand the capacity in real time by simply adding nodes.

“That was a key piece, because we don’t want to be sticking our fingers up in the air and saying, ‘Hey, I think we’re going to grow 20 percent,’” Borchert says. “I’m not just putting money out there on the table.”

The new infrastructure has also improved FNCB’s disaster recovery capabilities. Before the upgrade, it had to run a hot/cold environment because of the connection between its primary and backup data centers. Borchert would joke that people had to schedule their outages ahead of time.

“By moving to Nutanix, with the synchronization that’s taking place, if we lost our primary site, we would come up on Nutanix within a few minutes,” he says.

The ability to quickly spin virtual machines up and down has the added benefit of letting IT try out new ideas to see how they work, which fosters creativity and innovation, he says.

The system is also easier to manage because it provides a holistic look at the infrastructure through a single pane of glass, Borchert says. “Every day we find something new that we can do that we didn’t expect.”

Learn the best practices for deploying a hyperconverged infrastructure.